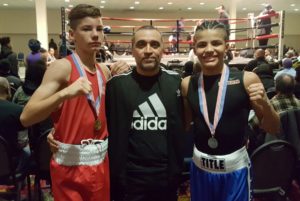 Eric Tudor won his first bout of the tournament in stunning fashion with a TKO victory over Devonta Nelson of Team Georgia then moved on to the finals to face the local favorite Deric “Scooter” Davis of Headbangers Gym D.C./Maryland and pulling off a decision victory in his opponents back yard which was a win in itself, (if you know what I mean!) allowing him to advance to the Silver Gloves National Championships Feb 1-4th in Independence, MO.

Xander Zayas won his first bout via unanimous decision over Keon Davis of Team Virginia in an action packed bout allowing him to move on into the finals and face another local favorite out of D.C./Maryland, Tyreece Johnson who towered over Zayas but that advantage made no difference as Xander stuck to the game plan and out hustled his opponent to take another unanimous decision. With the win, he also will be advancing with teammate Eric Tudor to the National Competition.

As many of you have witnessed, both fighters have worked their tails off in and out of the gym and as a coach I’m extremely proud of them but I’m also proud of the fact that all of you “our members” have fully supported our program and stuck with us through the good times and bad and wanted you to know, we as a team appreciate YOU!!!

WE’RE MOVING ON TO NATIONALS