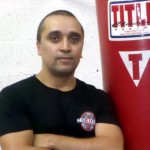 Originally from Brooklyn, New York Javiel moved to Florida in 1990. After 20 years of competing in various competitive sports such as Gymnastics, Fencing, Aikido and Boxing he decided to focus on creating a career based on his lifelong passion for fitness and the combative arts. Based in Davie, Florida Javiel’s Sweatbox Boxing & Fitness gym was “born” and quickly became a highly sought after facility to train.Over the years Javiel has been working with multiple Athletes and Fitness clients reach peak performance. Through his knowledge, drive and dedication Javiel has created and implemented specific physical programs designed for his clients. These programs along with Javiel’s fitness coaching and support has given his clients an edge to be one of the best in their sport. He has found extreme satisfaction in being a part of USA Boxing as an official and trainer working with amatuer fighters to reach their personal and professional aspirations and looks forward to working with competitive Jiu Jitsu players and MMA fighters just the same.Apart from his fitness coaching career Javiel likes to spend time with his beautiful wife Diana and supporting his son Javiel, Jr on his quest to becoming a Kung Fu Black Belt. Javiel has recently started to get the itch for competition once again and has started to train in Jiu Jitsu and looks forward to the new challenge. In his free time, you will probably find him at the book store studying his craft or at the beach, taking the time to relax. His undying love for sports coupled with his drive to help others to achieve their health, fitness and well being goals keeps him motivated and anyone who meets him will agree his passion for sport and fitness is insatiable.